Several years ago, I read about Deza Malone from The Mighty Miss Malone by Christopher Paul Curtis. Stella Mills from Stella by Starlight by Sharon M. Draper brought Deza to mind. I think Deza and Stella could have been friends if they lived closer to each other. Both girls grow up fast, but grew up strong and caring. 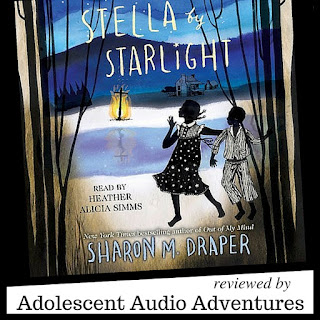 Stella's story is a family story from author Draper. She draws from her grandma and her father. Her grandmother was a writer. She wrote down her life in a diary and only one has survived. Her father grew up on stories from the elders and walked along the roads of North Carolina.

The Mills family lives in (fictional) Bumblebee, North Carolina. One evening in the moonlight, Stella and her little brother Jojo see a burning cross and men in white costumes. The town was already segregated, but a fresh wave of change is here.

Heather Alicia Simms read Stella by Starlight. What a smooth voice to hear! Simms has a gentle quality, even when the events of the story were intense. I would definitely listen to Simms again. She could differentiate between women, men, boys, and girls during her reading. There were songs as well which she sang a capella. Well done!

The only other music in the story was the intro and exit music which folded into the story very well. The intro music was one voice humming a song and the exit music was a choir singing the song. (I could share the song title, but I want to save that treasure for the next listener.)