Have you heard of the Mr. Eric? He's a singer as well as a well-known author! Perhaps you've read about Pete the Cat or The Nut Family. At an early childhood conference, I had the opportunity to sing and dance the polka dot dance with Mr. Eric. A fun and surprising brush with a children's music celebrity! 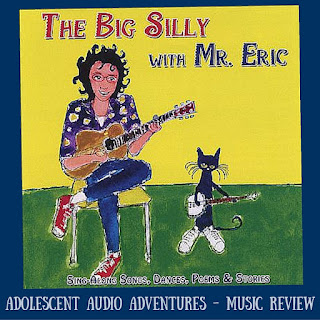 The Big Silly with Mr. Eric features fourteen different styles of music with a variety of song themes. It's also a winner of two awards: 2007 iParenting Media Award and 2007 Children's Music Web Award. Mr. Eric loves to include movement in his songs and there is plenty of clapping, dancing, up and down on this CD. The CD inserts feature the artwork James Dean and his Pete the Cat character. It also includes of full list of music credits and thanks. It does not include song lyrics. Songs times are listed next to the song titles on the back of the CD case. Special guests are listed on the back of the CD as well: Elise Witt, Kingsized, Michael Levine, Rivka the Opera Singer, Nikki Warner, Dr. J, and Pete the Cat.

You can get a preview of Mr. Eric's songs at cdbaby. Below is the track list and a few notes from me. The italicized tracks were some of the songs I would consider using during storytime:

Track List --
1. - Mr. Eric's Jumping Song - bluegrass - movement song (jump, clap, shake) - instrumental sections
2. - Hip Hop ABCs - hip hop - alphabet song - forward and backwards
3. - I Want Chocolate Pie - zydeco - question and answer
4. - Dance Number Three - dance - movement song to the count of three - instrumental section in the middle
5. - Poor Pitiful Me - blues - blues with
6. - Twinkle Twinkle Little Star - ballad - traditional song with original verse
7. - Wreck of Old 97 - folk - traditional ballad (historical notes can be found at Wikipedia)
8. - The Number Dance - disco - movement song - counting song (0-10) - fast paced dance song
9. - We Like Lunch (with Rivka the Opera Singer) - opera - a capella
10. - The Humpty Rap - funk rap fusion - traditional nursery rhyme with a funky twist - call and response song
11. - Stop Drop and Roll - rockabilly - fire safety
12. - Are You Sleeping - lullaby - French and English sung in a round - I think other languages are used as well, but I don't have an ear for languages and there are no notes in the CD pamphlet.
13. - The Wheels on the Bus - ska - traditional song re-imagined
14. - Pete the Cat and His White Shoes - story song - This song can also be heard online.

Email ThisBlogThis!Share to TwitterShare to FacebookShare to Pinterest
Labels: AtoZ, B, Music