Have you heard of Mike Soloway? He has created two volumes of Moving with Mike. They are labeled as Fun Songs for Creative Movement, Dance, & Fitness. I would have to agree! A close friend who is an early childhood teacher found some of Soloway's song on Amazon. After her excitement over finding some great movement music, I knew I had to find out more about Moving with Mike. 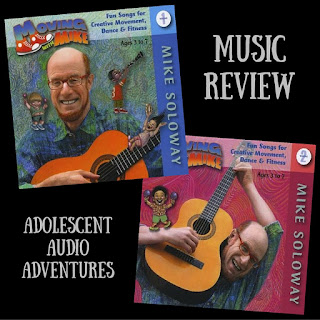 Mike Soloway has two volumes of fun songs for creative movement, dance, and fitness. Each CD has a great range of movement songs. I have used several during storytime at the library. He has a unique voice and lots of energy in his songs. A preview of his music can be found at Amazon. I've tried looking for a website for Soloway, but all I found was his jazz guitar website.

The CDs are in printed cardboard cases with a plastic piece to hold the disc in place. The inside covers share thank yous, dedications, and credits. There is no insert with lyrics. The back of the case lists the song titles as well as the length of each song. Song lengths range from 2:20-4:31.

Below are the track lists for both volumes of Moving with Mike with a few notes from me. The most popular songs I use are Tippy Toes and Irish Hop, but there are so many more great songs besides those two. The italicized tracks are the tracks I've used during storytime:

Reviewed from a library copies.