Have you heard of the plenteous Hap Palmer? He's a been a very influential children's singer for decades. He's one of my favorite kindie musicians and I haven't heard all of his albums yet. My storytime good-bye song is one of his songs. Today's CD, Creative Movement and Rhythmic Expression, does not have the good-bye song I use, so I'll have to share that on a later date. 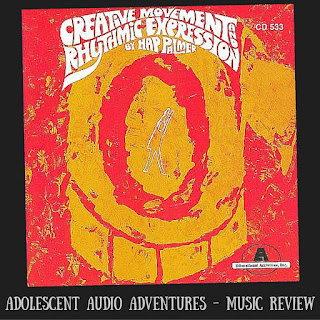 The goal of Creative Movement and Rhythmic Expression is to give children a way to freely express themselves during music. Lyrics are included in the CD insert, but instructions are not included. The songs explore listening, movement, shapes, and colors. The songs have a great pace for kids to follow along with the song. They are not too fast and give instrumental "pauses" from the lyrics to give listeners the chance to move! I also like that many of Palmer's songs "repeat." (Similar verses with different movement options.)

If you're hearing a song for the first time, it can be intimidating to move right away when you don't know what's going on. When verses are repeated in similar fashion, listeners can pick up on what to do and wade into moving more. It's also easier to create your own verses for a more personalized version of a song!

You can get a preview of Hap Palmer's songs at Educational Activities, Inc. Below is the track list and a few notes from me. The italicized tracks were some of the songs I would consider using during storytime:

Reviewed from a personal copy.