Review: The Door by the Staircase

Mysterious Madam Z arrives at the Buffalo Asylum for Young Ladies. Mary Hayes jumps at the chance for adoption to leave that terrible place. But does that mean jumping from the frying pan into the fire? 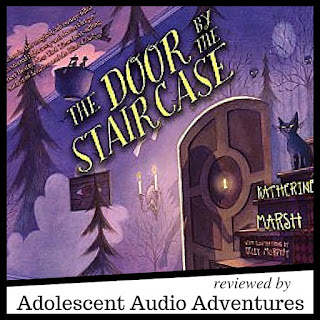 Katherine Marsh has woven together a very mysterious (at time frightening) tale. It's a retelling of a
Russian fairy tale / folk tale - Baba Yaga. Being unfamiliar with such tales, I walked into a whole new territory. The village is called Iris (narrator pronounced it "ear is"). The village was described as an occult town, which threw me for the loop, but I stayed with it. Iris is a tourist town that features magicians, illusionists, con men, charlatans, and such. Madam Z lives near Iris, but has her own kingdom where she lives and takes Mary home. Mary meets a young magician, Jacob, in the town and they discover the magic in Iris. Some magic is truly just tricks, but other magic is real and connected to Madam Z's world. They join forces to uncover if Madam Z is safe or harmful for Mary's future.

I appreciated the play between magic tricks and fantastical magic. I loved that Mary had a copy of Household Tales (fairy tales around the time of the Grimm brothers) that she read throughout the book. The Russian food described during the book was also very interesting. If you like Russian literature, folktales/fairy tales, or scary books, this would be one for you! I picked it up because it was a fantasy story, but it was a bit unsettling, or dark, for me.

A silly side note... In my imagination the door by the staircase, was never by a staircase. The mysterious door was next to the fireplace. There were no staircases in my imagined home of Madame Z. It's just fascinating how all minds are different and each reader will create their own Baba Yaga home when they listen or read this story.

Laurel Merlington read The Door by the Staircase. I liked her narration from the beginning. Mary sounded young and Madam Z sounds elderly and Russian which was how those characters were described. Jacob and Koshchey, the male main characters, sounded masculine to me. Yulik the cat was the hardest voice to hear for me. It was close to her natural narration voice, but Yulik doesn't speak until later in the book. This is the first book I've heard with Merlington and I would listen to her again.