Review: In a Blink 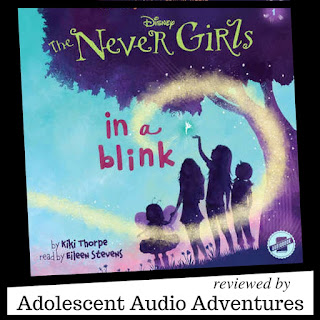 Characters from Disney's Tinker Bell movies are going about their lives in Never Land when human girls arrive. The four girls traveled in a blink. They have to stay in Pixie Hollow until a solution arrives to sent them back home.

It's a fine story that has a touch of suspense. There is a small cliff-hanger at the end. The book is categorized as an easy or early chapter book. There are currently two audiobook collections of the Never Girl series from Blackstone Audio / downpour.com. Each collection contains six titles in the series for a complete collection of twelve books.

I enjoyed listening to narrator Eileen Stevens. I did recall seeing / hearing some of the characters in the Tinker Bell movies. I thought she captured the Pixie Hollow fairies pretty well. The four girls have different personalities and Stevens gave each girl a slightly different voice. I would listen to Stevens again. I doubt I'll listen to the entire series. I am not passionate about Disney Fairies, just wanted to hear a taste of the series. They have been popular books at my library.