Review: All Rise for the Honorable Perry T. Cook

A long title for a quick read!

Meet Perry, a 12-year-old who grew up in a minimal security prison in tiny, tiny Surprise, Nebraska. His mother, Jessica is close to parole. They have dreams when they exit the gates. Their timeline is coming to a close. But Perry is forced to leave Blue River Co-ed Correctional Facility without his mom and before the parole hearing. Something isn't right. Someone is turning their lives inside out. It's the new District Attorney. 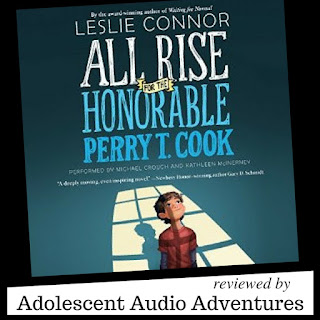 I could not stop listening to this audiobook. It's up for an Audio Award this year and I can hear why it made the short-list for Middle Grade. Author Leslie Connor has written a story that grabs the reader and draws them into the world of Blue River. Perry's family turns into your family. The ups and downs, the joys and heartache become your own. You want to see everyone succeed! This is a story that after you hear it, you want to share it with everyone. You should hear this book!

Extra notes ... I want to hear more about the Blue River family! There are a couple curse/swear words in the story, but it is very minor. Other themes besides family and prison include friends, school, forgiveness, and truth.

Michael Crouch and Kathleen McInerney narrate All Rise for the Honorable Perry T. Cook. I was intrigued about having two narrators. It fits the story well. Most of the book is narrated by Perry (Michael Crouch) while Jessica (Kathleen McInerney) narrates a couple chapters here and there. It's Perry's story, but it's Jessica's too. Both voices are needed to share the history of the Cook family. They don't take away from each other, but build on each other to create depth of character and understanding. Crouch and McInerney sounded good together in the story. The characters are on the younger side (11 and 29), and both narrators gave very believable voices for each main character. The supporting characters were given vocal depth as well, so they could be distinguished from one another. It was fantastic! I would listen to this book again.

Email ThisBlogThis!Share to TwitterShare to FacebookShare to Pinterest
Labels: A, Audies, Middler, MP3