Earlier this year I heard Nooks & Crannies by Jessica Lawson. Over the summer I listened to Lawson's newest youth novel, Waiting for Augusta. Both books were captivating, but very different in their locations and history. 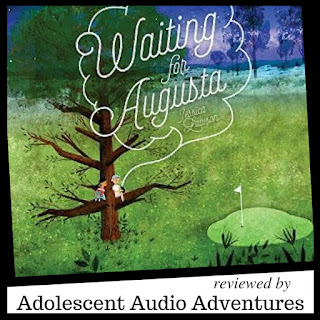 Waiting for Augusta is set in the South (Alabama and Georgia) during the 1970's. Segregation is happening as well as the Masters. Benjamin Putter seeks to give his dead father one last wish - to have his ashes spread on the 18th hole at Augusta National. He runs away from home with his father's urn and another young runaway, Noni. They both have a mission of unfinished business and it will take a trip to the golf course to see them both resolved.

Luke Daniels narrated Waiting for Augusta. This the first full length book I have heard Daniels narrate. Previously, I heard him briefly in The Chronicles of Harris Burdick. I was very impressed with his voices and characters. Ben Putter hears the voices of things around him. Each character that spoke was different. I think the hardest, but possibly the most memorable was the voice of a clock. I could make out all the words, but it sounded like a ticking clock! Very impressive vocal work, Mr. Daniels. I would definitely listen to another book read by Luke Daniels.

The narration was my favorite part of the book. The story line was heartrending then terribly tragic for me. Benjamin Putter works through his grief and misunderstandings with his father which was an interesting listen. I appreciated the theme of golf because very few children's books offer that as sports theme. Noni's story (which she doesn't share until near the end) took my breath away. I have no words for what happened to her. I tried explaining it to other readers and I just ended up crying all over again. My body hurts just thinking about her story. Well done on the realism, Ms. Lawson.

Some readers will love this story and I think others will never want to read it. I am closer to the never read it camp. It's a lot of emotion packed into one book.

I received this audiobook for free from Audiobook Jukebox for an honest review.