The End of Artime is Here!

Island of Dragons is the final installment of Lisa McMann's Unwanteds series. I've waited on the edge of my seat for each audiobook release. The series has been captivating! Island of Dragons made me want to cry because it's the end of a series that stole a piece of my heart. I've gotten to know the people, critters, and statues from Artime, Quill, Island of Shipwrecks, and the other islands. I don't want to say goodbye... 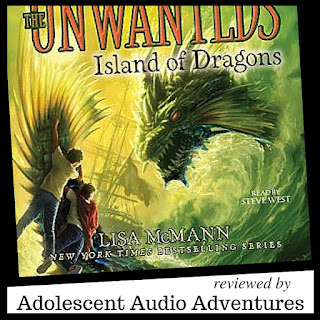 Yet there is always a time for a story to wrap up. McMann brought the conclusion of the Unwanteds to a satisfying end. She also left room for a sequel. More adventures are on the horizon! I cannot wait! Uwanteds Quests is coming in 2017! Thank you, Lisa McMann for not leaving these beloved lands.

Steve West returns to narrate the last Unwanteds tale. Yippee! I've enjoyed his voice for several of audiobooks in the series. Mr. West is beginning to feel like an audiobook friend and I love to hear his voice make the story come alive. Simon & Schuster did have a female voice share the beginning and ending information for the story and production. The end of disc voice was jarring for me, but I have a multi-disc player so have that interruption was annoying to me. I know other audiobook listeners appreciate the "end of disc" statements. I hope West return for the next installment of the Unwanteds adventure. I understand if a new narrator is chosen for a new series, but Mr. West would be greatly missed.

Thank you, Ms. McMann and Mr. West. It's been a treat!

Email ThisBlogThis!Share to TwitterShare to FacebookShare to Pinterest
Labels: 9 CDs, I, Middler, Series, YA