The focus shifts from Percy Jackson to the god Apollo who has been thrown to earth as a human teenager. The beginning is a humorous trial of escaping garbage, bullies, and fruit. A strange coincidence ... right as I began listening to the book I walked past a banana peel on the sidewalk. How ironic to sight it around the the beginning of The Hidden Oracle. You'll understand if you listen or read the beginning of the book. 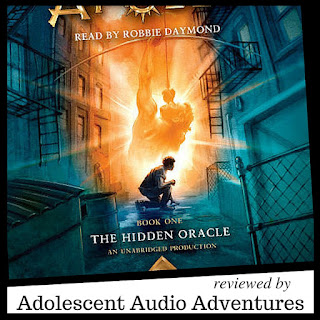 I will admit that I have a Percy Jackson gap. My last check in with the series was The Mark of Athena ... which was published in 2012. The saga began with Greek gods, moved to Roman gods, and now the series returns to Greek gods while keeping tabs with characters from previous books. Listeners and readers of the series will enjoy this next installment. I'm glad to have touched base with Camp Halfblood & friends, but I'm not sure how closely I'll follow along with Apollo's trials. Some themes of the book are friendship, mythology, romantic interest between guys and gals, romantic interest between guys, overcoming obstacles, and fighting/battles. I also heard the humor sprinkled throughout which had me chuckling. I think the guiser gods might be my favorite characters.

Robbie Daymond's reading of The Hidden Oracle was fantastic. Apollo is a bit full of himself and Daymond gives voice to his attitude so well. I think his reading made the book. Apollo is the main character but there is a plethora of ladies, gentlemen, and mythological creatures which Daymond shares with different voices. I look forward to the next book I find read by Robbie Daymond!