Echo weaves together four stories into one. Pam Munoz Ryan begins Echo by taking the reader to an enchanted forest where Otto gets lost and then found. Fast forward and meet Friedrich in Germany at the beginning of World War I, fast forward again to meet Mike in Pennsylvania between the great wars, and finally fast forward to meet Ivy in California during World War II. How can all these people relate to one another? It through music and a little bit of magic. 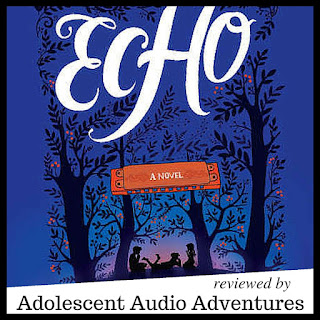 Every character is facing troubles. They are seeking a way out and a plan to save someone they care about. A light in the darkness is the beauty of music they find in a harmonica. Music can bring people together and hush away horror for a while. Otto's story started the whole musical journey. Frederick's story made me want to stop listening or throw it out the window. Mike's story had me rooting for the underdog. Ivy's story had me wishing for better understanding. Oh my heart! What an amazing book! If you like music, history, or a little magic, this is a story for you. If you appreciate a memorable story, you need to hear this story.

It's definitely a book to hear rather than read. It was nominated for an Audie for good reason! Each main character is read by a different narrator: Otto by Mark Bramhall, Frederick by David de Vries, Mike by MacLeod Andrews, and Ivy by Rebecca Soler. I appreciated the extra production information from Scholastic that shared the names of the narrators and musicians who played a roll in Echo. Each CD begins with a narrator David de Vries telling the listener which numbered disc is being played.

The music, the ever encouraging music is throughout the entire book. It's also specially created for this story by Corky Siegel. No stock music or generic tracks here. Sometimes the music is underneath singing and other times it is by itself.  Each song has a special meaning for the characters and the music is played with feeling the harmonica, cello, and piano. The final selection brings it all together! (I'm not going to spoiling it here.) The final song arranged by S. Peace Nistades is also played in its as the final track on CD nine.