Review: Beauty and the Beast: Lost in a Book

Beauty and the Beast: Lost in a Book by Jennifer Donnelly was a GoodReads Choice Award Nominee for Middle Grade & Children's in 2017. That was very intriguing to me. I was also interested to see if the story would follow the Disney version of Beauty and Beast. I can share that the main characters are the same, but the story is uniquely written. If you're a fan of fantasy, Disney, or fairy tales, I think you'll enjoy this story. 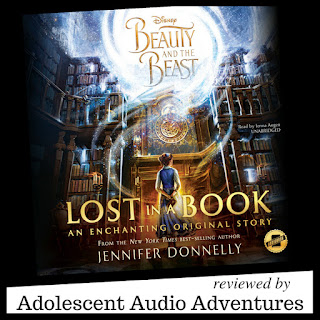 Here is the book description from Disney:

"Smart, bookish Belle, a captive in the Beast’s castle, has become accustomed to her new home and has befriended its inhabitants. When she comes upon Nevermore, an enchanted book unlike anything else she has seen in the castle, Belle finds herself pulled into its pages and transported to a world of glamour and intrigue. The adventures Belle has always imagined, the dreams she was forced to give up when she became a prisoner, seem within reach again.

The charming and mysterious characters Belle meets within the pages of Nevermore offer her glamorous conversation, a life of dazzling Parisian luxury, and even a reunion she never thought possible. Here Belle can have everything she ever wished for. But what about her friends in the Beast’s castle? Can Belle trust her new companions inside the pages of Nevermore? Is Nevermore’s world even real? Belle must uncover the truth about the book, before she loses herself in it forever."

The audiobook narrator for Beauty and the Beast: Lost in a Book is Jenna Augen. This is the second Beauty and the Beast book she has narrated, but the first one I have heard her narrate. It was a very enjoyable voice to hear. Her natural British accent added the perfect charm to this fairy tale story. There was a mix of male and female voices throughout the story as well as a variety of ages. I thought Augen did a great job. I was able to hear the differences between characters and her male voices were well done. I would listen to her read again.

Reviewed from a Blackstone Audio copy. Thank you, Audiobook Jukebox!
I received this audiobook for free and wrote an honest review.

Email ThisBlogThis!Share to TwitterShare to FacebookShare to Pinterest
Labels: B, Blackstone, Jukebox, Middler, MP3, YA