Review: The Writings of Paul Frees

Paul Frees is a legendary voice actor. His voice appears in some of my favorite movies. I was interested in what he wrote and I was in for a surprise. It was not what I expected. He wrote during a different era. The following selections are on the audiobook The Writings of Paul Frees: 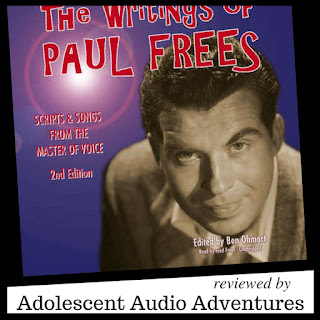 Frees wrote some science fiction and science fiction isn't one of my top genres. It was interesting and a bit creepy. The first story made it hard to continue listening to the whole audiobook. The format of a read script didn't put me off, it was the story. The sound creature, or monster, killed people. The Collector's Item was interesting. It sounded like a silly commercial about a mad man with bats in his attic. And the short story, Freddy, was interesting, too. Freddy was a story about a science loving kid.

Paul Frees' son, Fred Frees, narrated the collection. He's dynamic like his father. I wasn't observant enough to notice that Fred read the book until I was writing my review. I was listening for voices that I recognized and was confused. After realizing my mistake, I knew why Fred's voices were a bit different from Paul's voices that I knew growing up.