Review: A Most Magical Girl

A Most Magical Girl takes place in Victorian England. Proper young lady, Annabel Grey, goes to her great aunt where they share magic with her. It is unbelievable that her mother never mentioned any of this to her. Now she is told that she needs to learn quickly in order to find the Moreover Wand in under London. She needs to fight white magic against the black magic that has arrived in London. 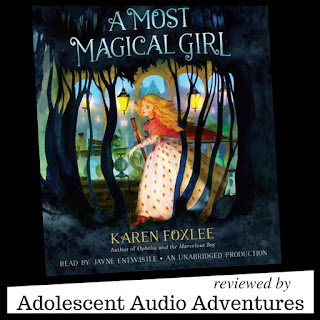 I was uncertain about A Most Magical Girl. I have been avoiding narrator Jayne Entwistle for some time. Occasionally her character voices get under my skin and I turn her off. I like a fantasy tale and I haven't heard Entwistle for a while, so I gave this audiobook a listen. The story was strange, but the narration was well done.

The story is a dark, gothic tale of good versus evil and young versus old. (Some moments reminded me of Neil Gaiman stories.) Mr. Angel was the dark magician who called up darklings from the shadows which is a bit unsettling. I preferred to imagine them as little inkblots in motion rather than how they were actually described. Annabel Grey did have a "friend," Kitty, who was along during the whole adventure. Kitty was interesting and wild and magical. Annabel and Kitty's adventure was nearly the entire length of the book. The wrap up at the end seemed rather short in comparison to the lengthy journey. The most interesting part of the book for me was the dark magic machine Mr. Angel created. It was fed by mourning tokens of the Victorian age. That historical addition was short and fascinating.

As I previously stated, Jayne Entwistle is the narrator for A Most Magical Girl. It was a good listen. Her voices were believable for all the characters. Annabel and Kitty were the main characters, but there were elderly ladies and gentlemen, trolls, Mr. Angel, and darklings. The character voices were maintained throughout the whole book. I would give Entwistle another go after hearing A Most Magical Girl.