A Whole New World begins a new series of Twisted Tales by Liz Braswell. A Whole New World is a dark new telling of Disney's Aladdin. Jafar takes center stage when he takes possession of the lamp and leaves Aladdin to die in the Cave of Wonders. 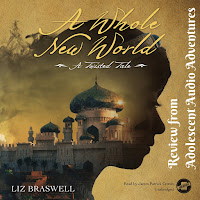 The known Disney characters do appear in the story - genie, Abu, Rajah, Iago, Sultan, Jasmine, Jafar, Aladdin, and magic carpet. Liz Braswell also introduces a tribe of street rats. Aladdin knows them but doesn't associate with them because they steal more than they need. But as the darkness of Jafar's rule overshadows Agrabah, he seeks out his old friends. It is time to unite and overthrow Jafar and his mad rule.

I need to begin with applause for Liz Braswell for recreating a classic Disney tale. Readers will either love it or hate it if they have strong feelings toward (or against) the original story. I grew up watching Aladdin and it was a fun, fresh movie. I would not place it as a top favorite or leave it on a dusty shelf to be forgotten either. I guess I'm middle of the road, so I gave A Whole New World a listen. (Rewritten fairy tales also are a favorite genre of mine, too.)

The story begins very closely to the Disney movie version. There a some small twists and turns along the way until Jafar takes the lamp and leaves Aladdin to rot in the cave. Genie (or jinn) is still strange - knowing more than he should about places afar and trying to be humorous. He was okay. I would have liked to hear about a more classic/historical type jinn character, but it is what it is. Jasmine and Aladdin meet in Agrabah and Aladdin is fascinated with her. It goes so far as to talk about Jasmine's cinnamon breath. The romance is stronger than the movie. The dark madness of Jafar is creepy and shocking at times. I don't want to give anything away, but there was a moment or two a gasped aloud while listening.

I appreciated having the animals in the story. The best part of having the animals was that they were animals! No anthropomorphism. Thank you, Ms. Braswell. The magic carpet could also be placed here as well. It was more rug than character. Well done.

I would recommend this title to young adults or adults. The darkness and romance could be too much for some late grade schoolers or middlers. I probably won't listen to it again.

James Patrick Cronin narrates A Whole New World. This is the first time I've heard him narrate a book. I think it was well done. The characters were given different voices. The ladies voices were believable. His voice was youthful so it fit well with the young Aladdin. Blackstone Audio added intro and exit music and other than that each track flowed into the next.