Andi Teran created a new twist on the classic tale, Anne of Green Gables by L. M. Montgomery. Ana Cortez from L. A. is on her last chance. She is sent to Garber Farms in Northern California run by siblings - Abbie and Emmett. She needs to participate in their (new) farm trainee program for the summer. Can she survive farm life after a rough life in the city? Will Abbie and Emmett send her back after the first day? 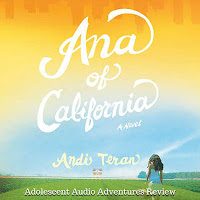 The Anne of Green Gables series is one of my top classic books to read. I fell in love with the books when I was young and adored the movie version with Megan Follows and Jonathan Crombie (except for The Continuing Story). I was intrigued by someone taking this classic tale and giving it new life in a modern setting. After listening to Ana of California, I'm kinda at a loss for words. It was ... a long story.

Recreating or rewritten a classical story isn't easy. Props to Teran for giving it a go! I could pick out different pieces of the original that were a part of this story, but it was more mysterious and dramatic than the original. Everyone having a backstory with secretes played a large part in those elements. Issues/struggles that are a part of the story include gangs, drugs, drinking, and sexual orientation. There is a bit of romance in Ana's life as well as Abbie's. Other topics include death, friendship, fostering, and farming. The story ends on a positive note with an opening for another book if Teran wants to follow up with more about Ana or Garber Farm. I am fine with this as a standalone story and don't need a continued story. I was a left with a 'meh.'

Andi Teran read her own story. I was a bit nervous to hear an author read their own tale, but Teran nailed it. I really enjoyed listening to her voice. She did well giving each character their own voice. I think my favorite character voice was Ana's social worker, Lupe Saucedo. Dreamscape did not add any music underneath the story, but kept it was pure narration except for someone else stating when the CD ended.

Email ThisBlogThis!Share to TwitterShare to FacebookShare to Pinterest
Labels: 7 CDs, A, Adult, Jukebox, YA