I was first introduced to the picture book H.O.R.S.E. two years ago (March 2013). I appreciated the story, but the illustrations threw me off of the book. I think it was the idea of using your tongue to shoot a hoop. That grosses me out. My brothers played basketball when I was little so I understand where that ball could go. Just the idea of it makes my skin crawl. To boil it down, I wasn't a big fan of the book because the imaginative illustration was too real for me. 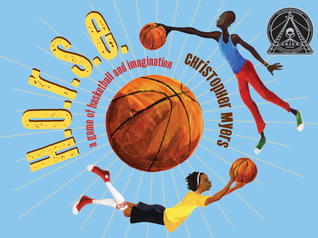 Let's fast forward to this year, 2015. Recently, H.O.R.S.E. won the 2015 Odyssey Award for Excellence in Audiobook Production. All right, I will need to give this book another try, "If it won the Odyssey, it's got to be good."

After listening to the Live Oak Media production of H.O.R.S.E., I think everyone who reads the book should listen to it as well. It's a two voice book, so they had two readers: Christopher Myers and Dion Graham. They also included a rim sound effect and funky, fun music underneath the story. Myers and Graham were so natural going back and forth with the story, it was as if I was watching the game from the sidelines.