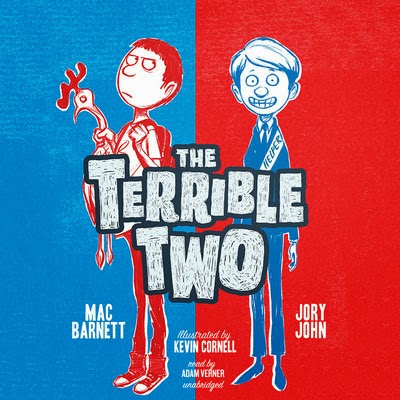 The Terrible Two by Mac Barnett and Jory John


Miles moves to a new town - Yawnee Valley. He is unimpressed with the new town that is known for their cows. Miles plans to be known as the prankster at his new school, Yawnee Valley Science and Letters Academy, as he begins his school day. Unfortunately, he is greeted by one of the greatest pranks he's ever seen - the principal's car blocking the front door to school! Before he knows it, Principal Barkin is accusing Miles of this prank and Miles is introduced to Niles, the school helper.

Authors Mac Barnett and Jory John have created a fun new book for older elementary and middle school students. It's been said that there will be more books to follow, but The Terrible Two is a great standalone book. It's a great book of humor and friendship. The characters can be extreme, like Principal Barkin being upset and red-faced most of the book, but it works! I can see readers loving this story. I think parents would be amused as well if families wanted to listen together during a car ride.

The book is illustrated by Kevin Cornell, but when you listen to the audiobook the only illustrations are in your imagination. I did not feel cheated by not seeing the illustrations.

Adam Verner narrated The Terrible Two. This is the first audiobook I've heard him read. It was well done. The characters were different and I think they're personalities showed through the voices he created. One character in particular got under my skin - Stuart. He liked to shout about the happenings in the story, so his voice needed to be "shouty." Stuart was definitely shouty ... and annoying. Currently, Stuart is a minor character, so I could live with his maddening voice. If the series continues, I hope Mr. Verner returns to narrate the rest of the Terrible Two saga.