Trolled by Bruce Coville is the third installment in the series, The Enchanted Files. The first books is Cursed (or Diary of a Mad Brownie) and book two is Hatched. 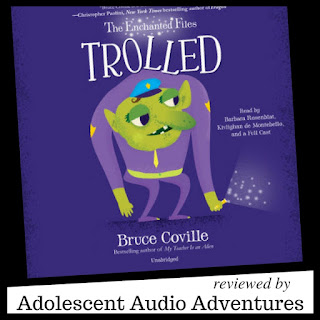 Listen to a sample on the Listening Library website!

If you enjoyed the first two titles, you will be sure to enjoy this third installment of The Enchanted Files. I appreciated the links between the characters in book one, Cursed, and book three, Trolled. The story was engaging because it was a diary or log setup with interesting side stories or documents. The variety of voices helps the listener understand all the different parts of the books - journaling, stories, documents, reports, etc. One "setback" to this audiobook would be there are no illustrations, but they are not a highlight in the story. I personally didn't care for characters saying, "OMG" in the story or the talk of farts. I'm sure it won't bother other readers or listeners.

The full cast audio is a great way to tell a story with multiple voices. I applaud all the readers because they had to have their character voice, but also characterize the other characters they interacted with during their part of the story. I could distinguish the characters and they were enjoyable to hear. I wish that all the readers were listed on the audiobook cover, but alas they are not. I couldn't find a complete list on the Listening Library website either. One strange sound effect during the story was during texts between characters. Their was a keyboard typing noise with a zoom noise at the end. The zoom noise was find, but the keyboard typing was very out of place. It brought to mind AOL Instant Messanger messaging rather than phone messaging.