The final installment of The Unwanteds: Island of Dragons came out last year (April 2016). Such a wonderful, fantastic series. With great anticipation (with a hint of unease), a new Unwanteds series has arrived! The Unwanteds Quests by Lisa McMann, narrated by Fiona Hardingham.


Journey back to Artime and say hello to familiar friends. 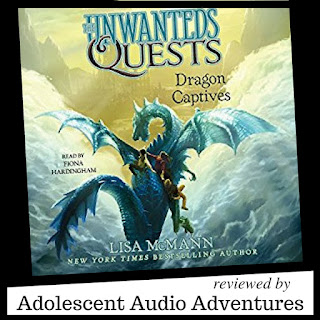 Dragon Captives takes place several years after Island of Dragons. The sister twins, Fifer and Thisbe, are older and bolder. They want to strike out on their own and use their unknown, magical powers. When an old friend, Hux the ice-blue dragon, arrives on Artime's shore, new adventure calls out to the girls. They can help Hux as wells as their brother.

Author McMann truly returns to the world of Artime and the surrounding islands. Time has passed, but she captures the feelings and tone of her previous series. There is humor, seriousness, twists, and a good cliffhanger. I cannot wait to hear the next book!

Narrator Fiona Hardingham reads the story. After several books with narrator Steve West, this change of narrator was a bit of a shift. It makes sense to change from a gentleman reader to a lady because of the shift of characters from brothers to sisters, but I miss you Mr. West. Hardingham does a fine job of sharing the story. Only one character made me cringe while listening - Simba. His voice is low and gravely and it can very difficult to capture. It takes strength to maintain a voice, but he sounded like he had Southern accent. I look forward to book two and we'll see if Hardingham returns to narrate the next installment.