The Wooden Prince by John Claude Bemis is on the shortlist for the 2017 Young Listeners Audie Award. It's the first book in a new series, Out of Abaton. Abaton is a magical kingdom, but it has ties to the Venician Empire (Venice). Book one shares snippets about Abaton, but all the action takes place in the Venician Empire. 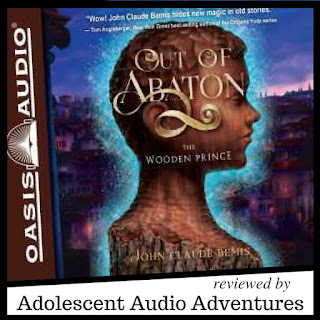 Bemis shares a new interpretation of the classic story Pinocchio. In The Wooden Prince, Pinocchio is a automa servant who carries something mysterious inside is chest. He is sent to the alchemist Geppetto by the ruler of Abaton, Prestor John. Geppetto is in hiding. The airmen of the emperor are after Geppetto and Pinocchio. Prestor John is imprisoned and his daughter, Princess Lazuli is determined to rescue him. As the story unfolds, their paths cross and the Abatonians band together to overcome the evil forces of the emperor.

This story is not what I expected at all. The magical world is built on alchemy and elemental forces (earth, wind, fire, water) which are attached to magical creatures (gnomes, sylphs, djinn, undines). Some readers might place this story under the steampunk genre. I personally didn't feel a heavy steampunk vibe. The story does wrap up well in book one with openings for book two. No giant cliff hanger for those who are uncertain to continue with the series. I'm not sure I will continue with book two.

The Wooden Prince under the shortlist for the Young Listeners Audie category and after finishing the story I'm questioning the placement. Shouldn't The Wooden Prince be in the next step up with Middle Grade? Young Listeners goes up to age 8 which is around second grade. This story is pretty in-depth with magic, battle, new worlds, etc. Readers can even download a glossary of terms online. I am sure there are some children who would happily jump into this tale, but in general this is not a book I would recommend to third graders and younger. If you have ideas or thoughts on the The Wooden Prince, please let me know. I would be very interested.

Audie awards are given for the production of the piece and this is a well crafted audiobook. Oasis Audio put a lot of time in adding music, sound effects, and voice adjustments for some of the magical characters. Narrator Ralph Lister was a fine voice to hear throughout the book. I have previously heard Lister reading The Haunting of Charles Dickens and The Flint Heart. I liked Maestro's cranky voice and attitude. The undine's voice was the hardest to hear while I was listening. His voice was very low and being accompanied with sound effects made the voice very muddy to me.

The added sound effects and music were a fine addition. The music is by Vernian Process. The sound effects helped and hindered the story. Some of the squelch noises were disgusting - eating and arrow pulling. Other sound effects help set the mood of the story - night crickets or a fire burning. I think sound effects were an interesting choice to add.