Author David A. Kelly has a new mystery series for young readers who are ready for chapter books! His first series, Ballpark Mysteries, focuses on mysteries located at different American ballparks (Fenway, Wrigley, etc.) His new series is MVP or Most Valuable Players. Book one is The Gold Medal Mess. Here is a brief write up from Kelly's blog: 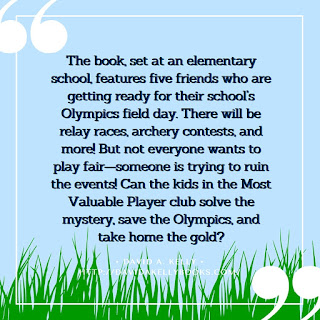 I know of the Ballpark Mysteries, but I never read any of the books in the series. They are a popular series for young readers who enjoy sports and mysteries. I think the same readers will enjoy this new series. Kelly kicked off with a great theme of Olympics in the year of Summer Olympics in Rio. Well played, sir! The mystery could be followed and solved by the reader, so it shouldn't frustrate young readers. It's also a mystery that is solved by a group of friends (or teammates) rather than a couple of friends or an individual.

Tonya Cornelisse narrates The Gold Medal Mess. Cornelisse is a new narrator for these ears. She has a husky voice which works well with female and male characters. She also needs to shares the voices of elementary students, middle graders, and adults. The voices sounded believable. You can hear a sample of The Gold Medal Mess on Listening Library's website. You can also see the next MVP book that will be narrated by Cornelisse. 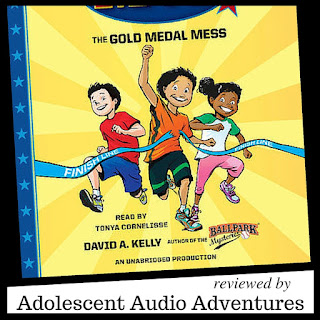