Review: The Zoo at the Edge of the World

Visit the Zoo at the Edge of the World! It is located in the jungles of South America. You will meet Ronan Rackham - conqueror and protector of the amazing wildlife found in the jungle. 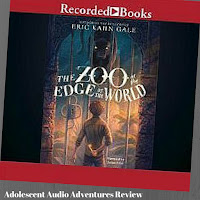 Ronan Rackham left England to explore the jungle. He brought nothing with him, but built up a zoo resort empire with his sons Tim and Marlin. Older brother Tim follows in his father's conquering footsteps, but Marlin survives in the shadows of the zoo. His stuttering gives visitors the impression he is slow or mute, but he can talk his heart out to his animal friends at the zoo.

Another ship arrives with a boatload of guests and Tim takes over welcoming everyone. Father, Ronan, has been out hunting the dangerous and elusive jaguar. Ronan returns with the jaguar who brings animal magic to Marlin and the resort.

The story Eric Kahn Gale created was captivating. (Yes, pun intended.) The main character, Marlin, was very likeable and the listener wanted to see this underdog succeed. I was also very drawn to the unique trait of stuttering that was given to Marlin. I cannot recall very many books that include a character with a stutter. It was very believable. The reader, Julian Elfer, did an excellent job of reading and stuttering through Marlin's words when he attempted to communicate with the humans in this story. His British accent also gave the story wonderful depth. I would listen to Elfer again.

I was surprised by the magic and darkness that was woven into the story. As the book continued, it seemed to get darker and darker as the characters struggled with how to keep the animals safe, the people safe, entertain the guests, and remain an amazing and beautiful resort zoo. It's a mix of fantasy, historical fiction, adventure, and conservation. I think the book was very well done, but it wasn't my favorite. I invite you to give it a listen (or read) and see how you enjoy the story. Everyone's experience is different!

I was greatly amused by the recommendation from Recorded Books at the end of this audiobook. They recommended Splendors and Gloom is you enjoyed The Zoo at the Edge of the World. I would completely agree with them! I think both titles were interesting, unique, historical, and a bit unsettling. I would recommend both titles to older listeners - middle school or late elementary.

Reviewed from an Audiobook Jukebox copy. Thank you, Recorded Books!