West of the Moon

West of the Moon by Margi Preus


West of the Moon arrived on the hold shelf at the library for me and I took a double take. What is this? Why did I place a hold on this audiobook? I checked it out with an attitude of maybe I'll get around to it.

Author Margi Preus created West of the Moon from a line of an old family diary. Her Great Great Grandma hired a maid from her immigrant ship who didn't have a family. Preus originally wanted to write about her grandmother, but the mysterious maid without a past beckoned her from the pages of the diary. West of the Moon is the fictional tale of the lonely maid. (Hear her read a section of West of the Moon at TeachingBooks.net.) 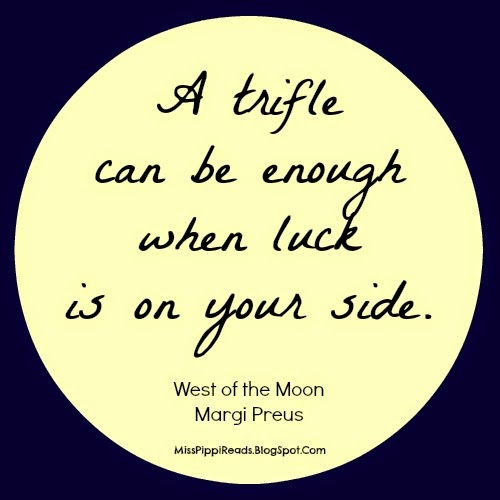 West of the Moon is a story of sisters. The elder gets sold to an awful goat farmer while the younger sister stays with their aunt's family on the family farm. Their father went to America long ago and Astri (the elder sister) wants desperately to take her sister (Greta) and go to him. As the days grow darker at the goat farm, Astri plans an escape! She runs away with another worker from the goat farm and makes her way to Greta. The three travelers now must escape the goat farmer who is tracking them across Holland as they make their way to the coast. To make their journey even more difficult, they have no money for passage or food for the voyage or legal papers from the church. Perhaps the little gifts the travelers gain upon their journey will turn their luck around.

As I stated earlier, I cannot recall why I originally placed this title on hold at the library. I'm thinking it was because it was a new title in the catalog. Or perhaps a review I saw...somewhere... Or the ties to fairy tales. I'm leaning on the ties to fairy tales. I love a good fairytale story and Preus wove several tales throughout the entire story of West of the Moon. The title of the book comes from the tale East of the Sun, West of the Moon which is the story about a girl and a polar bear. The fairy tale additions didn't standout, but rather wove into the fabric of the whole novel. Astri loved to share stories with her sister and she used the stories as ways to relate to her life. It was very interesting and historically relevant to the times - circa 1850's. Stories were handed down and stories sometimes became belief. Preus shares historical information at the end of her novel about the fairy tales she used as well as the beliefs of the people at that time in history.

I would recommend this title to middle schoolers or high schoolers. The journey isn't always pleasant and the choices made along the way were difficult and trying. It's a book that can generate lots of good discussions in the classroom. It could also springboard activities for students to dig into their family histories or research the fairy tales mentioned in this book. I personally went and checked out East-West renditions from the library including Sun and Moon, Ice and Snow by Jessica Day George, Ice by Sarah Beth Durst, and East by Edith Pattou.

Jessica Almasy narrated West of the Moon. I first Almasy, when she narrated Operation Yes by Sara Lewis Holmes. I enjoyed her voice during Preus' story. She has a youthful and upbeat voice. With the dark turns that arrived during the novel, the story was still alive without turning depressing or horrifying. I also liked her male voices. Female voice artists struggle with the lower male tones, but Almasy did a very smooth job. It never sounded forced or out of place.